PCT Goal Achieved! It's All About The Experience

Taking some time off in Portland, OR and visiting with a family friend for a few days was a real treat. It was my first time since beginning this trail down at the border of Mexico that I had spent any time in a city. The cacophonous nature of such a place was harsh on my senses as I’ve been used to the quiet sounds of nature for such a long period of time. As relaxing and exciting as it was to take some time off from hiking, I felt more than ready to push on when I crossed over Bridge of the Gods and entered Washington, the last state of my journey.

The word brutal doesn’t even begin to describe what the conditions were during the first two days of Washington. The humidity was close to unbearable, the hills were unprecedentedly steep and there were absolutely no views due to the dense forest. This was reminiscent of some stretches along the Appalachian Trail, where views are virtually non-existent and your only goal for the day is to try and occupy your mind through the monotony of the terrain ahead of you. Now, the dense forest is beautiful and mystical, but it was difficult to appreciate it when everything on your back is soaked in sweat and you’re walking through precipitous trail for 30 straight miles. When I think back on this stretch of trail, it certainly wasn’t the most difficult, but I was going through a bit of a mental barrier. I had lost “Ranger”, my hiking partner who was now at least two days ahead of me. I think this fact, along with the loneliness I experienced on this stretch, really took its toll on my attitude.

Due to the rough stretch of trail I was experiencing, I wasn’t able to do as many miles as I had hoped. I left Portland with about four days of food to get me to the next road crossing at White Pass. I hadn’t planned on doing any short days. I ended up with very little food as a result and I knew for a fact I wouldn’t be able to make it to White Pass with what I had. Desperate to figure out my next move, I decided that I would walk down a remote Forest Service road to a paved road that I could use to try and hitchhike into the closest town. As luck would have it, I was able to get into town and back to the trail in about three hours with a full food bag. I find it’s best not stress over adversarial situations. Usually there’s a way out of them if you simply put the time in to try and figure it out logically. The key is to always remain calm. Since this trail’s completion back in the 1960s, thousands of people have done this before me. If they can figure out the logistics, so can I. With this new found positivity, I started enjoying the trail more. I was still very much alone and not seeing many other hikers, but I was excited to be out there. Nothing was going to stop me from getting to Canada at this point. Not even the rain that pelted me for the next two days, which surprisingly made everything extremely cold at night. The volatility of the mountains is always surprising. The weather turned from hot and humid to cold, wet, and rainy in a matter of twelve hours. I learned the true meaning of being uncomfortable, having to wake up in the morning and put on wet, cold clothing to begin my hike for the day. Like I said, calmness and positivity is key.

After passing through the epic beauty of Goat Rocks Wilderness, I had finally made it down to White Pass. Serendipitous moments seemed to be a theme for me on this trail. As luck would have it, I just so happened to bump into an old friend (not from the trail) that I hadn’t seen in almost two years. In a remote mountain pass at a small, strange convenience store, I am suddenly face to face with my friend. She had seen me through a window and ran outside to greet me. I ended up taking a short day that day and spending some time catching up with her. It’s incredible how the smallest moments can have such a large impact on maintaining a positive mind set. From then on I was able to keep myself from thinking down the rabbit hole of negativity. When everything in your environment seems to be working against you, seeing a familiar face and experiencing that boost of light can make all the difference in the world.

Mountains Through The Trees

Mountains Through The Trees

Trail With a View

Trail With a View

Brian on the PCT

Brian on the PCT

For some reason, this positivity led me on a hiking rampage. Since I was hiking alone, it really made no difference how many miles I did in a particular day or how hard I pushed myself. A few days after White Pass, I was feeling physically and mentally at the top of my game. I woke up one morning with no plans on where I was going to camp that night. I ended up putting in a 37.3 mile day. I hiked at about a 3 mph pace for a little over twelve-hours straight. That day put into perspective just how desolate this stretch of trail really was. I only saw about three other hikers that entire day while hiking, all going southbound. Although, serendipity stepped in yet again when I bumped into a hiking buddy that I hadn’t seen in quite some time. “Squeaks” was just hanging out next to the trail with a few other thru-hikers that I had only met briefly earlier on the trail. From this point on, I would see these people intermittently all the way until the end. If I didn’t push myself this particular day, who knows if I would have seen these people again.
Not only did I meet back up with a wonderful group of hikers, but I was lucky enough to even coordinate with my old trail friend Kenny. As you may remember, Kenny and I met early on way back in the desert. Him and I hiked about 800 miles together through the heat and waterless stretches of the Mojave, and entered the snowy Sierras together. We lost each other in the heart of the Sierras just before heading up and over Pinchot Pass. From that point on I was always a few days ahead of him. It’s always difficult to alter one’s pace to meet the needs of others. We stayed in touch over texts and it just so happened that after 1700 miles of being apart, we would be in the same place if I took one day off.

Armed with companionship, we were all able to push through the cold, wet Cascade Range of Washington. This section of trail was not easy, but it made all the difference in the world to not take it on solo. Pushing through the unforgiving landscape of the Washington Cascades, we were soon confronted with a harsh reality. We had learned that the last 60 miles of the trail, starting at a road crossing called Rainy Pass all the way to the Canadian border, were completely closed. This news disheartened us as we weren’t going to be able to walk into Canada. Now, at the start of this journey I had fully expected this to happen at some point. I knew it was highly unlikely that I’d be able to walk all the way from Mexico to Canada along the PCT and not have to skip at least one stretch of trail due to forest fires. I just did not expect to get so lucky as to not have to skip over anything (sans two small detours in Washington) until the VERY END of the trail. It was deflating, but also something we all had to accept as a reality. This trail really isn’t about the destination. I had set out to hike every open mile of the Pacific Crest Trail in the year 2018, and that’s exactly what I did. I pushed myself to my physical and mental limits, met amazing people and experienced nature in its absolute glory. I was content with that. Thinking back on everything that I had been through; the hot and arid desert, the snow fields and steep mountain passes of the Sierras, the harsh and desolate woods of Northern California, the clouds of mosquitoes in Oregon, and the cold and wet mountains of Washington, these last 60 miles just did not matter at all. I had done it. WE had done it.

I was lucky enough to have an amazing friend drive all the way from Montana to transport me and three other smelly hikers. She drove us up into Canada so we could hike south from there (about 16 miles round trip) to the border monument since it was technically open on the Canadian side. Luckily, even with that last 60 miles completely closed off, we were still able to access where the trail ends directly at the border crossing. It’s difficult to describe the flood of emotions we all had at this moment. It truly is a pivotal, life changing moment when completing a long distance trail. This highly personal and emotional moment is only made better when gone through with others. We spent an entire afternoon hanging out by the monument and discussing life after the trail. Hiking the last eight miles out back to the car was silent and daunting. Trail life is now over and we have to return back to the “real world”. It’s a bizarre and intimidating feeling. I was lucky enough to have the opportunity to hang out on a conservation range in Montana where my friend worked for about one week while I reconstructed and reintegrated myself back into a normal state of mind. It was almost as though I had to work up the courage to get on the plane and leave for home.

I’ll be forever grateful for the experiences I had out on the Pacific Crest Trail. This journey will forever be a part of me. Thank you so much for following along and thank you to Golden Girl Granola for granting me the opportunity to share my journey with you all. Life moves quickly and the past provides us with the core strength to push forward in times of tumult. I hope my story will inspire you to push out of your comfort zone and live your life in a way that’s meaningful to you. 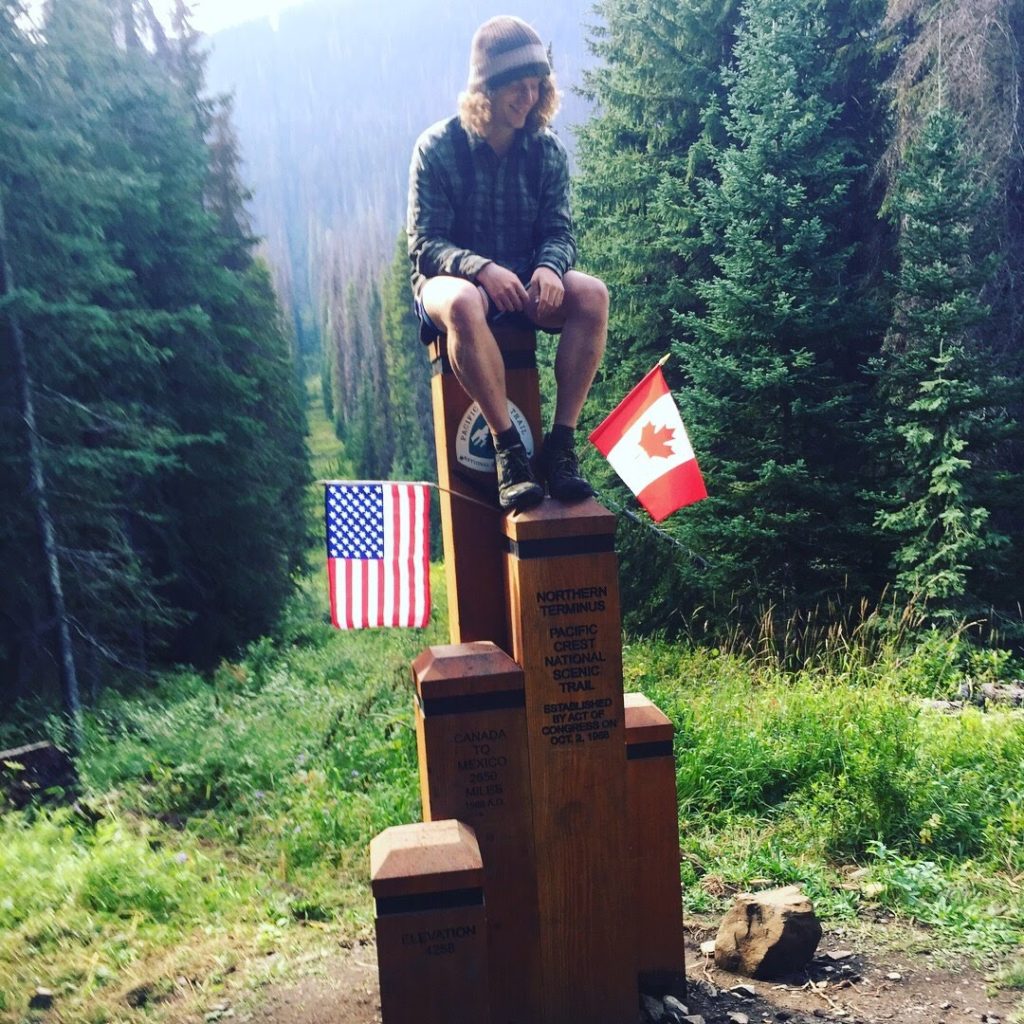